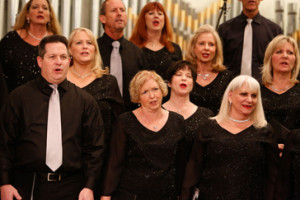 With a repertoire encompassing both traditional and popular styles of music (jazz, swing, Broadway, classical, gospel, patriotic and rock are all included at one time or another) the South Coast Singers is comprised of more than forty talented singers from all over Orange County. The Singers offer quality performances in a “pops” style to enthusiastic audiences each season.

Founded in 1992 as the Capistrano Chorale, the group had its beginning as ten women singing two-part harmony and performing in a gym at the Dana Point Recreation Center. Today, the mixed group often performs complex arrangements ranging from 4-part to 8-part harmony. Concerts are presented in churches including Geneva Presbyterian in Laguna Woods, Presbyterian Church of the Master in Mission Viejo, and Gloria Dei Lutheran in Dana Point.

In 2000, the Chorale became a California nonprofit performing arts 501(c)3 corporation and in January 2002 changed its name to South Coast Singers. The group is dedicated to fostering the musicianship of its members and to bringing education, enjoyment and cultural enrichment to the community. The South Coast Singers present a series of concerts throughout South Orange County twice yearly, in June and December, as well as additional special performances throughout the year.

Always well-received by those who attend, "joyful" and "awesome" are words repeated over and over by audience members. "The musicianship shown by this group is breathtaking," wrote one member of the audience. Each season South Coast Singers gain additional enthusiastic fans as they continue to bring their love of choral music to the community.

Community involvement is an ongoing goal of the South Coast Singers as they seek to share their love of music with the public and, with support from community and audience sponsors, they continue to pursue that goal. In past years, they have participated in Soka University of America’s International Festival on the Green, lent their voices to Christmas at the Mission in San Juan Capistrano, and were selected to participate in Disneyland’s Candlelight Choir during the holiday season.

Past investments by Arts Orange County and the City of Laguna Niguel aided the Singers in establishing its Community Outreach Program which includes an annual scholarship competition known as Stars of Tomorrow. After preliminary auditions, high school vocalists from all over Orange County compete for prizes totaling over $4000. Established more than fifteen years ago, these annual competitions have helped many to achieve their career goals and several past winners have gone on to become successful Broadway and Classical performers.

The South Coast Singers are bound together by their love of music and their dedication to each other and to their director, and that love and dedication is expressed in every performance. Audiences come away from their concerts with a smile and a feeling of joy. An insightful writer once said : “We don’t sing because we’re happy; we’re happy because we sing.” That line could have been written by any number of joyful South Coast Singers.

Join the South Coast Singers for their next concert series -- let them capture your heart with song.

Do you love to sing? Well, you are in luck because we are always looking for new members who love to sing. We hold auditions twice a year, in August and February.  If you are interested in becoming part of our musical family, contact us for more information at info@southcoastsingers.org or call 949-613-7840.  But let us warn you: you will become addicted to the fun and the music very quickly.

So you don’t want to sing but you love music, enjoy concerts, and want to support local high school students follow their musical dreams? Then PLEASE join our fabulous group of sponsors and donors.  Many wonderful businesses have faithfully supported our organization throughout the years, making it possible for us to help hundreds of Orange County high school vocalists pursue their hearts’ desires.  On their way to Broadway or opera stages throughout the world, our scholarship recipients are supported by the generosity of these sponsors. We invite you to join our sponsor family today!  Email us at info@southcoastsingers.org to request our information packet.